By Small Change Diaries on 6th March 2016 in News I have always loved music, buying my first records aged 13 and listening to Hendrix, The Doors and The Velvet Underground at the age of 15! Back then the music industry was of course very different and a far cry from the X Factor and Voice which many expect instant rise to stardom! There’s an old saying in show business “It takes 10 years to become an overnight success” In other words perfecting any skill requires good time management, focus and stamina.

I remember hearing an audio book by the excellent Robert Fripp from King Crimson who when in the early days of playing still worked in a fulltime job with his father. Tom Verlaine from Television up until the release of Marquee Moon, still maintained his job in a bookstore in New York! One of the big lessons in creating The Small Change Diaries is in ensuring that time is managed to best effect and “the delivery system” for the music is properly in place.  These days’ digital platforms and social media are key in getting the word out to a wider public. It’s not enough to have great music, it has to be really well recorded and there have to be many different ways in which people can access it. This means having global digital distribution, physical products and using video.

The “business” side of the “music business” means constant decisions about how to best allocate time and money to best effect. Of course each person’s idea of “success” will be different. For many people playing an open mic night is as far as people want and that’s of course absolutely fine. I have noticed that some artists can be amazingly busy but do most of their gigs for free, with the idea that it’s all promotion. This may be true to an extent, but my business background over many decades tells me that people only value something if there is some trade involved. The trade may be purely financial and/or it may be in other ways. Sometimes the association with playing as a support act with artist X or being invited to play at a particular location can create some useful kudos for generating other work. 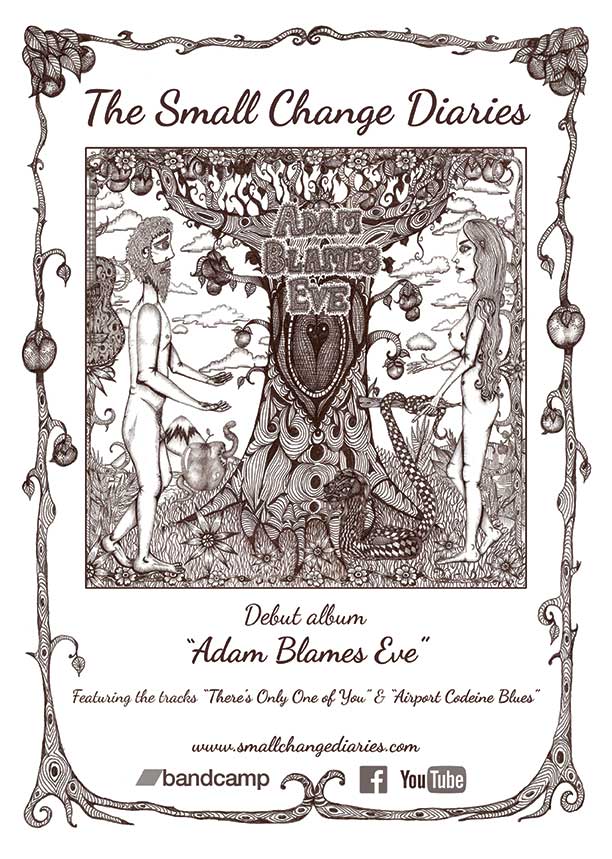 The first two years with The Small Change Diaries have been about finding the right combination of musicians as well as writing and recording original material. Myself and Jessica Bowie would meet every week without fail to work on new material as well as existing songs ready to be recorded. To date we have the first album “Adam Blames Eve” with 13 songs, and 5 new tracks ready for the second album due for release early 2017. We also have material for “Protest Songs” an EP that will be launched at GNUF in May. Live gigs start next month with some low key appearances. Almost half the tracks off the first album have been broadcast on BBC Radio for BBC Introducing and the FB page for the band is just short of 2000 members. All this requires a serious amount of time investment and financial commitment!

I talked recently to a good friend of mine who is a very well-known singer in a band engaged in an international tour at present, including the UK. I realised from our many conversations that his record label creates an amazingly busy schedule and it occurs to me that “the band” is their business investment, so like any business it needs promotion in as many ways as possible. Personally I wouldn’t want that kind of scenario regardless of the financial rewards and the inevitable ability to reach a very large audience! Creating and delivering original music requires a great deal of focus. There are all manner of factors to consider.

The Small Change Diaries play ukuleles, but I would never consider us to be an exclusively ukulele band or one that plays to an exclusively ukulele audience! Our interest is in creating music for the brain and music for the heart. The ukuleles are central to the sound, but with forthcoming material we will also include flute. Walking dulcimer and mandola instruments in the mix. It remains a fascinating and inspiring journey and I feel honored to be surrounded by so many quite brilliant creative types that make this all possible!