By Small Change Diaries on 7th January 2015 in News

This week we will have completed the final mixes of the first 7 Small Change Diaries tracks, originally recorded in November at RRS Studios in Leeds. The tracks are:

There’s a wide range of musical styles in these tracks, ranging from blues, jazz, ragtime, folk, and country. The duel ukuleles are at the heart of the sonic footprint which makes for a very different sound. In the near future some of these tracks will be made available as free downloads on our Bandcamp page. On February we’ll be back in the studio to record an additional three tracks. In the meantime Jessica Bowie and myself (Nick Cody) will be recording some acoustic duo tracks we have been working on again with an emphasis on lyrics, strong melodies and harmony vocals. Later in 2015 we’ll be releasing the first SCD album. One of the challenges we have is that as well as these seven completed tracks we currently have another fourteen songs ready to be recorded at this point in time! I’m pretty confident that all seven of the above will make the cut and my hope is that those listening will enjoy what they hear! 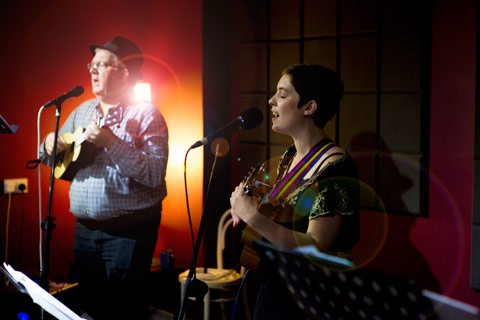