By Small Change Diaries on 23rd November 2014 in Behind the scenes, News

We just completed the first day in the recording studio for The Small Change Diaries. Recording sessions always produces all manner of emotions, from inspiration, to frustration and everything in between. As soon as you “record material” it’s like shining a 1000 watt spotlight on what you are doing! For me it also shows that practice is invaluable! Today we laid down the core elements of six tracks which makes for a terrific start to this session. 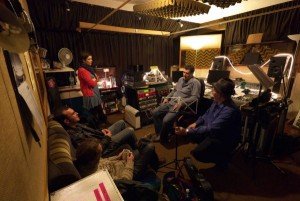 We started the day by making sure we had the best possible mic positions for all the instruments. Everything with The Small Change Diaries is acoustic so it’s essential to get the right sound before we press the record button. I took 6 different ukuleles to this session and settled on playing the following three main instruments – Shimo Comet 3, Shimo Concert, Collings Pre Production UC1 and Collings Tenor (played by Jessica Bowie) I’m really pleased with the overall sound and of course Garry Jackson, Rich and Rob were as always a superb compliment to muself and Jessica.

Tomorrow Jessica Bowie and I will be mostly concentrating on adding vocal parts to today’s tracks. We are very lucky to have an excellent producer with Carl Rosemond who has decades of working with musicians and who really knows his stuff! I have a whole new respect for anybody recording material, yes it’s fun, BUT its a serious amount of hard work as well! 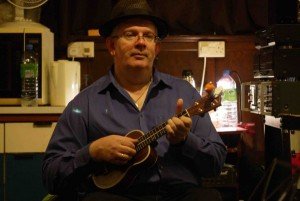 Getting great takes is all about getting the right balance between being relaxed and being suitably concentrated. Inevitably there will be a need for different takes, but everybody did brilliantly and we concluded with a superb version of the instrumental Cold Mountain. Jessica Bowie also did a great job putting down the main part of “Miles Ahead” with terrific bass from Gary.

It all starts again tomorrow at 10.30, when we add vocals to Airport Codeine Blues and One Day I’ll disappear as well as finally recording the acapella Armish frame of mind!

Its going to be an early night and long sleep tonight!

Special thanks to Sue Elton for photos and superb food that kept our energy levels in check!

The Development of The Small Change Diaries and plans for 2015 by Nick Cody
Day 2 in the Studio with Jessica Bowie, Nick Cody and Rich Ferdi