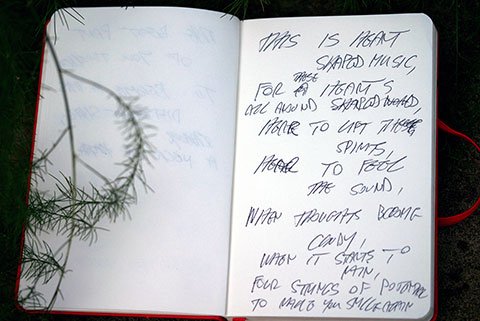 Often ideas will come to mind at all hours of the day and night. Most of the songs for The Small Change Diaries are based on real life experiences, personal observations or people I have met. I’m lucky to travel extensively, so it’s not uncommon to be in up to ten overseas countries in any given year. This can be a great inspiration for inspiration even if it’s the lamentation of such travelling.

“I’ve got an ice pick in my head, at least that how it feels, 24 hours of travelling; this brain is doing reels…”
Airport Codeine Blues ©Nick Cody

Sometimes a line for a chorus will appear or a line that becomes the start of a particular song. The favourite time for this happening is very early in the morning, often before the sun comes up. I’ll wake up with a few lines of a song and I have realised the importance of writing them down. Once I have the first few lines in most cases the rest of the lyrics appear in draft form quite quickly and in many cases an entire song can take shape in just a few hours. The usual process for song development is to firstly show the song to Jessica to bounce around ideas and then to tabulate the music with Rob Sayles identifying chord structures and sequences. This has proved to be a highly process for developing this material.

The Emergence of New Songs

Tracks like “Birdman” and “Rona” were based on real life experiences of meeting people. Birdman is about a wonderfully eccentric record store owner who used to be a trader but now was the owner of “Rainbow Records” in New York. The store can only be described as chaotic in the extreme where vinyl and CDs are stacked up high with no filing system. There’s a narrow isle in the store for one person to walk at a time, but most folks I have seen once entering the store run away in fright! Rona is about a woman I met in Tel Aviv who suffered a car crash at age 15 and was in a coma for two weeks and then in rehab for three years. I met her twice during my stay when she mentioned that the Israeli government provided her with ready rolled marijuana joints to ease her pain

“The man in the office rolls you a joint again It’s a take away service, to take away this pain”

The songs are all originals, although we also have worked up a few cover versions for playing live. Original songs often take a great deal of refinement in terms of writing lyrics and melodies. It’s a fascinating, inspiring and at times frustrating process. I have a new found respect for anyone who creates such work. I find the process fascinating and often it’s as if songs just appear out of nowhere. Each needs time and attention, and I am mindful not to play anything to the wider public until it has a great deal of care and development.

“Writing songs is like capturing birds without killing them. Sometimes you end up with nothing but a mouthful of feathers.”
Tom Waits

My time spent with Martin Simpson massively helped me to explore altered tunings and one of my favourites with the ukulele is to tune the low G up to an A. I use this tuning on a number of songs including “Open Up”, “This Heart wants what this heart wants” and “The Small Change Diaries” When writing “Miles Ahead” I struggled to find a melody for the lyrics and passed the task over to Jessica who did a superb job so the lyrics which are about Miles Davis not have an excellent jazz melody to accompany them.

The combination of two ukuleles and guitar makes for a very distinctive sound and I have explored using different types of ukuleles to suit each song. I don’t have a great musical awareness of ukulele chord structures, so many of the melodies for songs have come from playing around on the instrument sometimes with capos to find memorable and interesting musical sequences. Many chords would be unconventional and it’s not been uncommon for Rob to remark during one of our tabulating sessions “This is a really unusual one!”