Instruments in The Small Change Diaries and the Shimo Connection

The first ukulele I bought was a pre-production Collings UC1 concert ukulele from Matt Umanov Guitars in New York. I was familiar with Bill Collings work as a guitar builder and through this ukulele looked quite cool, so I bought it on impulse. Little did I know that after a few years of dormancy this tiny mahogany instrument would spark an entire creative process to generate “The Small Change Diaries” 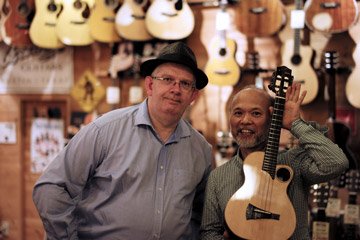 During one of my trips to Tokyo I discovered the wonderfully named “Ukulele Mania” store and met Dean Leoni. My first purchase from him was a Kanilea Ku’uipo Tenor Koa ukulele is made in Hawaii and has a wonderfully sweet resonant sound, suitably different to the Collings UC1. The following year I was introduced to the extraordinary luthier Takahiro Shimo and bought two of his individually made ukuleles the “Comet 7” and the “Comet 3”. The Comet 7 is made from Honduran mahogany and is highly unusual in that it allows the player to choose between a high or low G, so the instrument has five strings. The Comet 3 is the most resonant ukulele I have ever played and was featured in volume 1 of the Ukulele Rhythms magazine 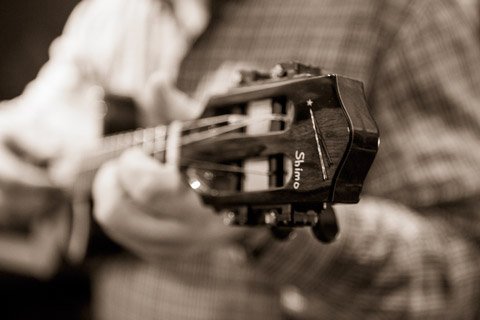 Each instrument has a very distinctive sound and the Shimo instruments are the very best I have found. I met Shimo in Tokyo in July 2014 and have commissioned another instrument from him. There is usually a two year wait for such items! 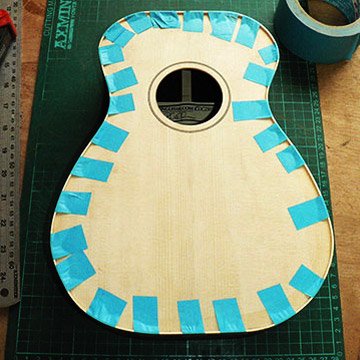 One of my current playing instruments for live work is a custom made tenor ukulele made by Rob Collins from Tin Guitars in Hebden Bridge; I decided to commission Rob to build me an instrument based on a Stephan Sobell New World guitar I own. This meant using the notoriously difficult African Blackwood material for the body and sides, and a spruce top. Rob added an internal Baggs pickup and the instrument has an ebony fingerboard. It’s a great playing ukulele and really loud too! I have already commissioned two more ukuleles from Rob which will appear later this year!